A Wonderfully Calm and Positive Birth!

Here we hear from one of our own Daisy teachers Jilly, about her calm and positive birth – a world away from her first experience of birth with her son…

“I honestly cannot thank Daisy enough, as a mum, for giving me the tools and the confidence to achieve the most amazing, healing birth!  I had a 3rd degree tear with my son and didn’t have the best experience so I was so determined to have a completely different birth the second time round.

I went to my scheduled 41 week midwife appt. on Mon 25th July.  I had been getting irregular contractions for the previous few days and earlier that morning had a bit of a show so I thought things were heading in the right direction but not imminent.  At the appointment my blood pressure was raised so they sent me to Barnet MDU and warned me that I’d likely be admitted.  I started mentally preparing to fight for my wishes as I was desperate for my birth to be at Edgware Birth Centre.

We were monitored for an hour, my blood pressure went down during this time so that was fine but both our heart rates were too high.  Hers settled into a nice pattern after a while so they sent me for a walk and to eat.  I went back on the monitor for another hour and both our heart rates had settled.  They could see I was having quite regular contractions at that point from the trace but I knew they weren’t that big.  Although I was using my centred breath throughout them I could have held a conversation during them if I needed to.  I was just trying to focus on reducing my heart rate and relax so I could go home!  A midwife persuaded me to have my cervix checked before I left (with the promise of coming back in two days for a blood pressure check) so I could gauge how quickly I’d need to call in when contractions got stronger.  Several midwives suggested a sweep several times, which I declined as I felt that things would happen by themselves.

At 9pm I was 1.5cm but my cervix was still 1cm long and quite firm, so I was convinced that nothing would even progress that night, which actually I was thankful for as I really wanted some sleep!   We got home at around 10.30pm and I tried to go to sleep but my contractions were getting stronger.  I made my husband put the TENS machine on about 12am with the vain hope I’d still sleep (they were coming every 5min or so) but I was struggling by that point to use the centred breath through them.  Once the TENS machine was on I felt much more in control.  I realised that by giving up on sleep, getting up, putting on my Daisy music (through headphones so as not to wake my son), moving around, doing gentle rotations, leaning forward during contractions and using the Escalator Breath things felt a lot easier.  By 1.15am Paul made me phone the midwife as contractions were coming every 3min and really strong but I was convinced I was ages away still.  As an on call community midwife was coming directly to Edgware from home they’d told me it was better to call early.  The midwife said that she would leave immediately and meet us there.

The power of breathing

At 2.30am I was at Edgware, my blood pressure and our heart rates were perfect and my cervix was 2-3cm dilated, soft and completely effaced.  The midwife gave us a choice to stay or go home as she’d already filled up the pool.  Luckily we chose stay as I couldn’t even make it down the corridor to help fetch our bags from the car as everything had just ramped up even more!

I was coping fine with the TENS machine and using the Escalator Breath, although I had started gravitating lower towards the floor with each contraction so I thought I was nearing established labour by about 3.30am.  The midwife disappeared at this point to hurry the other two midwives (one student).  However, I didn’t click that anything significant was happening as I was still laughing about how hungry I was in between contractions, but never having enough time to actually eat!

The midwife had suggested using the pool for delivery to avoid another bad tear like I’d had with my son.  At this point she had mentioned using the pool a few times so I got in.  She could obviously tell I was close, if I wasn’t I would have got out and gone back to using the TENS as I didn’t actually find the pool that comfortable!  I kept instinctively pushing during contractions so I told the midwife and she said go with it as it was either my waters bulging and about to go, or it was the head.  Before I knew it two other midwives and my second birth partner had arrived and they started setting everything up for the baby’s arrival.  Once the midwife managed to persuade me to open my legs to have a look she told me it was the head and to keep following my body.  I’d be using the Out Breath near the end of every contraction rather than all the way through as we specifically wanted the delivery to be as slow as possible.  It was amazing to be able to listen to my body the whole way through labour but particularly during the delivery stage.  To slowly allow baby to descend using the Out Breath the way I felt I needed to, and to feel baby wriggle around when she was releasing her shoulders was so bizarre.  It was nothing like the controlled pushing from my first labour! The delivery was so calm that she was born in her sac!

Evie was delivered at 4.25am on Tuesday 26th July 2016, weighing 8lbs 3oz, so very quickly from start to finish but it was exactly what I wanted and a world away from my first birth and we were home as a family of 4 just 12hrs later!”

Thank you so much for sharing your wonderful calm story Jilly!  Love Daisy x 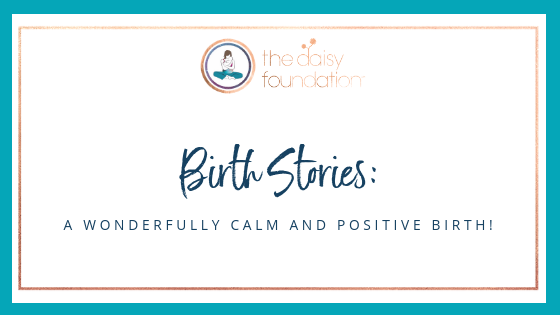