The Power of Breathing, Movement and Positive Affirmations

Today we hear the story of Daisy teacher Jenny’s positive birth where she used the power of breathing, movement and positive affirmations throughout her labour.  Prior to becoming a teacher herself, Jenny attended three terms of Daisy Birthing classes in Belper and finished about a week before having her baby Georgia.  Georgia was born at 2:40am Sunday 20th December weighing 7lbs 10oz at Derby Birth Centre.

“I’d had a sweep on the Monday which although favourable led to no more than a few cramps and part of my show.  I was booked in for a second sweep on the Friday in the hope of getting things moving.  Friday morning came and I had some blood on wiping but thought nothing of it having had part of my show earlier in the week.  The midwife, however, was concerned as it wasn’t particularly ‘mucusy’ so sent me to the pregnancy assessment unit to get checked out.  After half an hour on the monitor and an examination from the doctor it was determined that it was just part of my show and that I was 1cm dilated but my cervix was still 3cm long and posterior.

​So I got my second sweep.  About 1pm, whilst on the monitor I noticed that I was starting to get quite regular braxton hicks but wasn’t expecting it to come to anything.  Back home the tightenings continued so I bounced and rotated on my gym ball, practised my breathing and made sure we had wrapped up all the remaining Christmas presents!  The braxton hicks became stronger throughout the afternoon to the point where by around 7pm I was able to definitely tell the start and end of each so I started to time them.  They were around 7 minutes apart and lasted 30-40 seconds.  Over the next few hours this intensified again until about 4am, when at 4 minutes apart each lasting a minute, I contacted the birth centre and decided to go in.

The Power of Breathing and Movement

Unfortunately, when I was examined, I was only 1-2cm dilated with my cervix 1cm in length so I was sent home.  The trip to hospital had slowed my contractions so I was able to get a couple of hours broken sleep.  I woke on the Saturday still having contractions but they were a lot more irregular, though lasting around 45 seconds each.  The intensity meant that I was having to breathe through each one.  I spent the day watching films (an American Tail and Elf being my favourites), dozing whilst propped up on my left when I felt tired, and rotating on my ball and moving around when I had the energy.  I even threw in a camel walk for good measure!

At 7pm I had a very strong contraction and lost some blood.  This was a lot more than I’d ever seen before and it was red so I went back to PAU to be checked again.  Baby again was fine and my contractions could be clearly seen and were about 5-7 minutes apart.  On examination I wasn’t actively bleeding so it was again just part of my show.  My cervix was now 2-3cm and fully effaced so heading in the right direction.

Back at home I settled on my ball to watch strictly come dancing but quickly found that I couldn’t concentrate as the contractions were getting more intense.  After a further hour where the contractions were at the point that I was crying out each time, despite being relaxed and listening to my relaxation CD, I decided to go back to hospital as I felt I couldn’t cope with it anymore and needed further pain relief.

The Power of Positive Affirmations

The journey to the hospital was not a nice one but thankfully there wasn’t too much traffic and before I knew it I was crouched in the corridor of the labour ward having another contraction.  They’d definitely ramped up and were coming every 3 minutes and lasting 90 seconds.  I said to the midwife that I needed more pain relief so she agreed to examine me as if I’d got to 4cm then I could have stronger stuff.  During the examination the midwife looked up, surprised, and said “oh! Do you want to guess how far along you are?”.  I just shook my head, worn out at this point, but extremely relieved when she told me I was 7cm.  I was immediately given the gas and air and started to feel a lot calmer.  The next 50 minutes passed by in a blur of breathing and rotating through each contraction.  Ray was speaking my positive affirmations and relaxing phrases to me, and I felt a real sense of peace and enjoyment.

Breathing the Baby Out….

Then suddenly my body pushed.  It was the strangest sensation and one I had no control of: my body just knew that’s what it needed to do.  I buzzed for the midwife who said “well if you need to push go ahead” whilst settling back on a chair.  With the next contraction the feeling was even stronger and I launched myself forwards from the position I was in on the edge of the couch, towards Ray who was kneeling in front of me.  I think I scared the poor guy but I just needed to be closer to the floor and on my hands and knees!  I could feel her every movement as I pushed downwards.  It was all a bit of a blur at this point but I do remember shouting out a swear word, saying “I can’t do it” and mooing a lot!  Seems my Daisy ‘out’ breath was also a natural instinct.  I also distinctly remember smiling as I knew I’d meet my baby soon.  The midwife had to break my waters as I was starting to birth them.  But very quickly afterwards Georgia made an appearance after 10 minutes of pushing.

I was handed her through my legs and stared in wonder at this perfect little creature that I’d just pushed out!  We left the cord to finish pulsating before Ray cut it and between the two of us we then had at least one hours skin to skin with her.  She was so alert from the start after showing us the power of her lungs when she was born.  I delivered the placenta without intervention: the midwife recommended the injection but I pushed out the placenta before she was able to give it to me.

All in all it was an amazing experience.  I felt so powerful!  I’m proud of how Ray and I got through it together and Georgia is the most wonderful gift at the end of it all!” 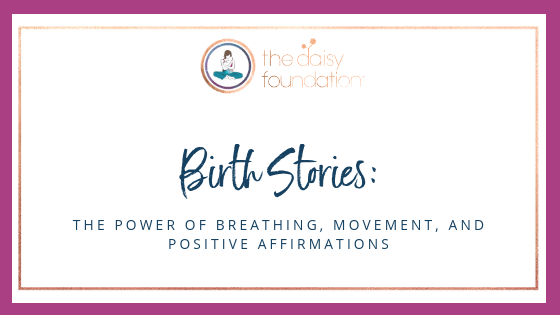