Sarah & Alma – a positive birth story from The Daisy Foundation.

First of all, I can’t thank you enough for the training. I’m crying as I type this. Probably just hormonal but I honestly wish everyone could go to these classes. I would not have coped with birth and would have been doped up to my eyeballs if I hadn’t known what was going on. So here goes the story for the page:

‘At about 3 am on Saturday morning I was awoken by my first contraction. I stayed awake but lying down to see if anything else happened, by about 7 am, I was having one every 15 minutes or so, so I knew then that this was something. We went downstairs, cooked breakfast, got my toiletries and bits into the car. Then took the dog for a walk for about half an hour. By the end of the dog walk (about half 11/12 )I was having contractions every 5 minutes.

I rang the hospital then, they didn’t want me to come in, suggested a bath and some paracetamol. So I did these things, felt ok but after about 2 hours I was getting fed up. Rang again they suggested waiting another hour or so. In the end we only went in at about 5 when I thought I really couldn’t cope (little did I know!). I was examined, found to be 1cm with a nice thin cervix. Gutted! Had to go home. I live 50 minutes away from the hospital so it was an excruciating car ride home but I insisted we get mcdonalds to cheer me up. I got home and immediately started feeling a lot worse. I couldn’t stay on the ball. All fours was the only place that I could cope with even though I knew I shouldn’t be in cruise control yet. I started getting sick (what a waste of money that mcdonalds was), and after about an hour and a half of this, Scott had to call the hospital as I could barely speak through contractions which were coming every minute. They still didn’t want me to come back in but he said that I just was not coping at home so they allowed it.

Got there and went into a lovely room. The midwife watched me for about 20 minutes and said that she thought every second ‘contraction’ wasn’t a contraction but rather naughty baby having very big wiggle after each contraction with her shoulders. As all my pain from contractions was in my groin, bottom and pelvis (rather than high up) I couldn’t tell that my uterus wasn’t tightening on these ‘second contractions’. I had never heard of this so was quite shocked but that is why she said that I had still only dilated to 2-3cms when I’d been having such frequent contractions. She then suggested that I wouldn’t be in active labour for quite a long time still so why not have some diamorphine so I could sleep. I had said I didn’t want this in my birth plan but after a sensible discussion she said it would be well clear of my body by the time baby was ready to come out meaning that it wouldn’t make baby sleepy or interfere with Breastfeeding but would just give me the relief I needed to lie down for a bit and rest for the long journey ahead. This worked for about 2 hours and although I couldn’t sleep when there was a contraction, they did slow down a bit and I could have a nap in between. My husband could also nap and not have me squeezing his hand after each contraction.

When this started wearing off the midwife suggested a bath, they are trained in aromatherapy at Gloucester so she put bergamot in it to relax me. It was wonderful to start with. Scott and I were watching lord of the rings on his ipad and he helped me breathe through contractions.

After four hours in the bath I really felt I need to be in a better gravity position and potentially getting some gas and air so I asked to be examined. I was 4-5 cms! The magic number! Suddenly I could go in the birthing pool and get gas and air. This was at 6 am. We were moved into our last big room, really nice. The daisy music went on and stayed on till the end. The minute I got in the pool I knew it was the best idea. The gas and air was really helping. I could be squatting and on all fours comfortably without holding my own weight. The warmth of it was lovely too. For about half an hour I even let Scott have a nap as I felt so jolly. That soon wore off haha! I had a twirl for some energy in between contractions. After about 4 hours I was examined again. I was only 6 cms. The midwife said that this wasn’t unusual for first time births but I was still disappointed. She offered to break my waters but as I was two weeks overdue she explained to me that there was 80% chance of meconium in my waters and if that did happen then I would be taken out of the pool down to the delivery unit. I really didn’t want this as I felt the pool was my only sure fire coping method right now. So we decided at length not to break the waters and carry on even though it meant my dilation was slow and the pressure was immense. But after 20 mins back in the pool my waters went in a shot and were clear so we got to stay in the pool. At about 12 (40 mins after my waters breaking) I felt on about every third contraction the need to push. The midwife said I couldn’t be dilated enough so I needed to fight the urge. But after about a half an hour (12:30) she said well if you feel you need to then do push (she said she had noticed that each contraction now needed a push element), but if your baby isn’t born by 1pm I’ll examine you and then we’ll know more. Well! At about quarter to suddenly 2 midwives rushed in and they started heating the pool temperature up and I was told baby’s arrival was imminent. The pushing phase only lasted about 25 mins as she was out by 12:54. I pushed in an upright seated position with my back against the pool side, I used a combination if the ouuut breath and a moo. I think I just started shouting in a low voice out eventually!!! I only had the head sliding in and out in the canal about 3 times and then her head and body came out in one big whoosh! She was brought straight onto me and kept in the water and they allowed my cord to stop pulsating (about 10 minutes). She gave a small cry initially for breathing but then was quiet. Scott got to tell us the sex as her whole body was in the water the midwives couldn’t see. When we could cut the cord she was handed straight to Scott for some skin to skin with just a towel covering her back. She then was given to me about 5 mins later once I was out of the pool and lying down as she was already rooting. We stayed with her suckling for the next hour and 40 minutes! Scott was ringing relatives but couldn’t tell them the weight as she wouldn’t stop feeding to be weighed!! We didn’t mind, I was just so happy at how well she had adjusted to the outside world. After her first 5 mins of suckling that stimulated enough of a contraction that the placenta plopped out in one big gush. I didn’t need the injection in the end.

I had a small tear but midwife said it was fairly minor and good considering how quickly she came out (raspberry leaf tea in action here??). Another interesting point on due dates: when our girl came out she was completely covered in vernix still. The midwives said they never see 2 week overdue babies with that much vernix on them… So they said the dating scan must have got it wrong as she was perfect. Apparently they also normally get very stressed and her heart rate only went up in the last 15 mins when her head was being squashed (fair enough).

I know this is probably the longest story ever but I thought it might be of use to some first time birthers out there as it is so complicated and I think all the details are important, if they can help anyone! It’s really hard learning to trust your own body when you have never laboured before. The decisions you have to make while in pain are very hard but the daisy classes really helped to let me have that clear head to have that ‘easy’ birth. No birth is easy, all the decisions are hard, but daisy gives you the confidence to roll with the punches and remember that your body was designed for this and to not be afraid. Thoroughly recommend the couples workshop too, Scott kept me on track when I really needed it or when my vocalisations got too high or my breathing too fast. He was fantastic but he did need to know what the best way to labour and I would not have conveyed that properly to him without the couples workshop.

Also, I know this isn’t relevant to most people in this group but gloucester hospital could not be faulted! Beautiful rooms with great lighting, en suite. The midwives were fantastically trained. No one told me to get on my back or told me how to breathe. Maybe that’s because I knew what I wanted and that was clear, but they were thoroughly supportive. ‘ 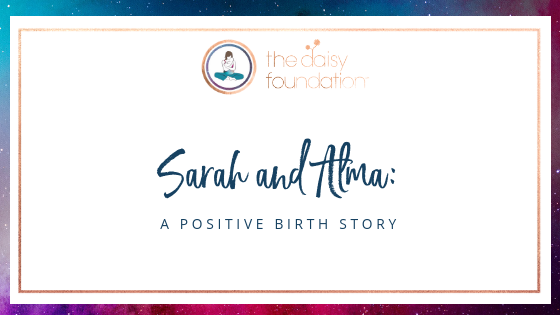