A Positive Induction Using the Power of the ‘Out Breath’

After attending both Daisy Parent and a term of Daisy Birthing with Tracy in Cheshire, Louisa felt prepared for her positive induction.  However, she was still taken by surprise with the speed of little Harrison’s arrival!  Here she tells her story….

I was induced on Thursday at 40 weeks at 4.30pm with a pessary and labour started from this.  I started getting pain around 11pm and decided to sleep through them which I did until 2am.  This was because the midwife had said the pessary can cause very bad period pains which aren’t necessarily contractions.

When the pains started getting worse around 2am I didn’t actually think they were proper contractions at this point as they were only low down in stomach.  I was tired still so decided to lay down on my left hand side then just after 3am my water broke whilst lying down.  The midwife wanted to monitor baby’s heartbeat.  All was good and she examined me and I was 6cm dilated so she said she would call down to labour ward to get me moved.

Whilst she was out of the room the pain suddenly sky rocketed and I really needed some pain relief (all I had so far was some paracetamol at midnight).  It had got so bad Keith had to buzz for them.  When the midwife came back in she could see how much pain I was in and asked me if I felt like pushing which I did.  She quickly examined me again and in the space of about 10mins I was fully dilated and she could feel his head!  Several more midwives arrived and they discussed if it was safe to move me which they decided it wasn’t.  Soon after our little man was here!!!  Harrison James Kelly, born Friday 25th August at 4.34am weighing 8lb 8oz.  With no chance for any pain relief!  Keith was very impressed that I managed to use the ‘out’ breath when pushing.  This was the breath that got him out.

It wasn’t quite how I thought it would all happen but it got him here quickly and safely and the main things we wanted happened: immediate skin to skin and an hour’s plus of this in a dim light; delayed cord clamping and a physiological third stage.  Breastfeeding is going well too.

Thank you again for the classes.
Best wishes
Louisa & Keith

Thank you so much for sharing your wonderful story! Daisy x 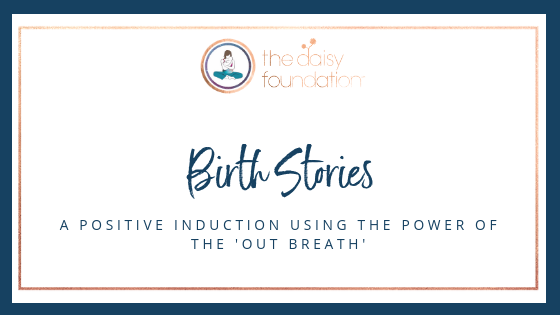 Website by Creo Design, part of the Solutions on Demand Group
The Daisy Foundation © 2021