When I found out I was pregnant my twin sister immediately recommended the Daisy Birthing course to me, due to her own positive experience only 9 months earlier.

I practice yoga regularly, therefore I was keen to learn more and attend the Daisy Birthing course, to understand how correct breathing and movement could help during pregnancy and labour.

I began Daisy Birthing in October 2014 (due date 12th February 2015) with a view to attend 2 courses (12 sessions). After a positive first 6 classes my husband was keen to also learn the techniques to help me through my labour, therefore we also attended the couple’s workshop in late November. The couple’s workshop really helped my husband to understand what I had been practicing and learning in my sessions. It also gave us great information on the birth stages and what to expect and when.

I carried on practicing the Daisy Birthing exercises and breathing at home after the second course up until I went into labour. At every scan and check-up throughout the pregnancy I was told Alexander was in the correct position. I firmly believe that the exercises positioned him correctly.

I had felt tightening’s in my stomach the evening before around 10pm which I initially thought was the baby moving. By 11pm these ‘movements’ appeared to have got stronger and I knew it wouldn’t be long before I went into early labour. At 12.30am my waters broke I alerted my husband and told him to phone through to the MLU at UHW to let them know. We were told that being our first baby that to expect a long labour and to call back at 10am with the intention of going into hospital at 12pm to be checked. Within the hour my contractions had started and were consistently 5 minutes apart and around 30 seconds long at which point I began the 8 and 4 breaths and attached the tens machine. My husband ran me a bath which I used for around 10 minutes however, the contractions remained strong and of the same intensity for the next 2 hours. I rotated on all fours whilst using my birthing ball for support and listening to the ‘Daisy CD’ whilst continuing the 8 and 4 breaths. The contractions grew stronger over the next few hours and by 5.00am my husband made the decision to take me into hospital, we arrived at the MLU at 5.30am where I was examined and was told that I was fully dilated at 10cm. I requested the birthing pool to be used for pain relief and the birth. After 10 minutes in the birthing pool I had the urge to push, I had very little gas and air during this time as I felt it dried my mouth and prevented me from breathing correctly. After 45 minutes of controlled pushing along with deep long ‘out breaths’ our baby boy was born into the birthing pool and into my arms with skin to skin contact immediately. We waited for 15 minutes before my husband cut the umbilical cord once it had stopped pulsating at which point our healthy, beautiful boy was passed to my husband. I had the injection to deliver the placenta which took around 15-20 minutes.

Giving birth was such a positive experience for me, it was so much better than I could have imagined. I felt calm and went with the natural rhythms of my body and flow of labour using only ‘Daisy’ breathing and movement, the tens machine and birthing pool as pain relief and a small amount of gas and air at the end.

I had a very calm and smooth birthing experience and I truly believe that the breathing techniques and exercises helped the baby into the correct position and aided his smooth transition from womb to world! I will certainly recommend ‘Daisy Birthing’ to all friends so that they too can have a positive birthing experience.

A lovely positive birth story from Natasha, a Daisy Birthing Mum, who attended classes in the Cardiff area with Daisy teacher Laura. 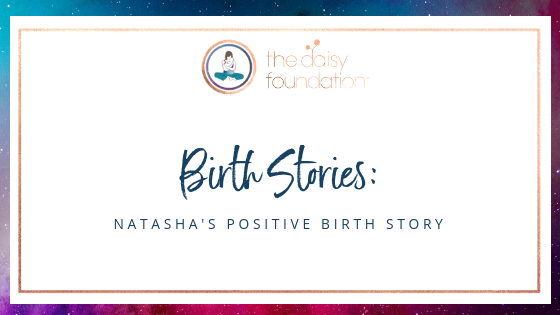