Kate and Zachary – A positive birth story from The Daisy Foundation

“I’m delighted to announce the birth of Zachary, born yesterday weighing a whopping 11lb 4oz! It was a brilliant experience and proof that natural, intervention free birthing is the way to go, even if your baby is huge!

I started having contractions on Easter Sunday, at 8 days overdue. I’d had several pre-labour signs in the week leading up to this, including losing my plug on Thursday and a very upset stomach on Saturday. My contractions started at 11pm on the Sunday after a good bounce and rotate on the gym ball. At first they were 10 minutes apart, rapidly sped up to 3 minutes apart but then spaced back out a bit – I found out later this was because he was a bit posterior at first. I managed at home using the centred breath, and found it most comfortable to be standing and leaning forward on to the bed or the kitchen counters, swaying my hips from side to side. I had a bit of paracetamol, and at around 5am we decided to go to the hospital. 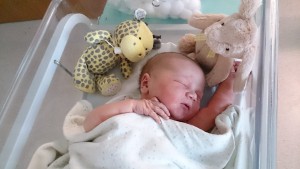 The midwife in triage examined me and said I was 4-5cm, so they sent me to the delivery suite. I managed to get one of the rooms with the birthing pool, though it had just been used so was only starting to fill when we arrived, so I continued to stand or kneel up and sway, leaning forward over the active birthing couch. At around 7.15am they still hadn’t got me in the pool, and I was starting to struggle with the contractions. They let me get in soon after this but the contractions were so intense that it didn’t feel as though it helped much so I started the gas and air as well. I didn’t realise but the intensity was because I had dilated very fast and was in transition – though my next cervix examination wasn’t due until 9.45! I felt the urge to start pushing almost straightaway in the pool, and my waters went somewhere around this time as well. At about 8am they asked me to get out of the pool, as my first baby had a shoulder dystocia and they didn’t want me to deliver in the water just in case. They encouraged me to kneel on the floor and lean forward over the couch. I didn’t use the out breath as I had the gas and air in my mouth, but made sure to keep exhaling and making noise. Zack was born at 8.10am with no shoulder dystocia. The ‘ring of fire’ was intense, but despite him being 11 lb 4 oz I didn’t even tear! He had crowned a couple of times in the pool before being born, so I think this helped to stretch everything out. I had delayed cord clamping while I held him in skin to skin which was lovely, and delivered the placenta naturally. The only downside was that I had a significant haemmorage after delivering the placenta so spent the rest of the day in HDU, but the doctors and midwives were brilliant and it didn’t mar the experience for me. It was the birth I had wanted and so lovely after my difficult first.

Thank you so much for all the techniques and breathing practice, it all helped a lot! ” 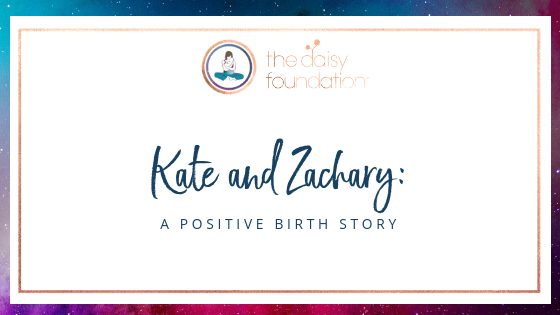