After sharing her lovely positive induction story last week, Elouise returns today to share the story of her relaxed, calm water birth with her second child.  This experience ultimately led to her becoming a Daisy teacher herself…

Any mummy of more than one child will tell you I’m sure, it’s certainly no picnic growing another human whilst trying your best to keep the one(s) outside your womb alive.  Glowing?  Radiant?  Afternoon naps?  No.  Knackered?  Pale?  Sick?  Yes!  Although I had managed to achieve the birth that I wanted when I gave birth to my daughter, people were so quick to state “Ooh you never have two births the same” or “you’ve had your straightforward birth”.  Yes, two births are never the same but does this mean that one has to be negative and one positive?  Surely if I could achieve the birth I wanted the first time around I could also achieve it the second time around?  Cue Daisy Birthing.  I needed a weekly dose of Daisy Birthing and I needed it quick!

This time round that weekly dose of Daisy was served to me by the very lovely Charlotte Collins in the desirable leafy village of Lymm.  These classes soon became the highlight of my week.  My sanctuary.  My time to switch off from that busy class of lively six year olds, from those piercing cries of a teething baby and from those anxious thoughts about soon becoming a mummy of a toddler and a newborn.  This was my time to simply relax, focus on me and my growing baby and just breathe……heaven!

Nine blissful classes later I found myself tucking into a tuna baguette and chips at a local garden centre with my mum and dad.  It was a beautiful sunny Wednesday in June 2016 and there I was, huge and four days over my ‘due date’. How on earth had this happened?  With the surprise early arrival of Luella, I was convinced her sibling would surprise us in a similar way.  But no: there was no way he was giving up the place he had made his home for the past nine months easily.  So there I was on that sunny Wednesday afternoon in the garden centre waiting for my mum and dad to pay for the lunch I had just devoured when an elderly lady walked straight up to me and asked “Can I?”.  She was referring to my bump and whether she could touch it.  Now my usual response to this would be “Hell no” but she was so smiley and sweet that I heard myself reply “Of course”.  The lovely lady proceeded to rub my bump and simply uttered the words “Just Beautiful…Just Beautiful…”.

That touching scene kept replaying in my mind as I drove to a reflexology session I had booked the previous day.  Although I had had a positive induction experience when having Luella, I really wanted labour to start more naturally this time.  With being past 40 weeks I knew that it wouldn’t be long before medical inductions would soon start to be offered.

A blissful hour later and I was driving home from my reflexology session with those two simple words ‘just beautiful’ going around my head once more.  Not because I was thinking about that sweet old lady in the garden centre but because it was the only two words that best described that heavenly reflexology session I had just had.  I went to bed that night feeling positive, calm and relaxed…

So there I was, almost 40+5 days pregnant fast asleep, when I suddenly woke at 2am with that familiar ‘gush’ like feeling.  It was reminiscent of that cold Saturday November night when Mark Wright had whipped his shirt off!  My waters had broken – not quite like Niagra Falls this time but enough for me to quickly ‘google’ whether I was in fact in labour and make that call to the midwife.

By the time my mum and dad had arrived from a nearby travel lodge to take care of Luella, I had started to experience some period like cramping which definitely confirmed I was in labour.

A calm and relaxed water birth

We headed to the hospital where in the car I started to hear Charlotte’s soothing voice repeating the phrase ‘relax the jaw to release the pelvic floor’ and I knew instinctively to relax and just breathe.

We arrived at the hospital by 3am and after a short period of monitoring, centred breathing and telling the lovely midwife all about Daisy, I was examined and was 5cm dilated.  I asked if the birthing pool was free as I had been toying with the idea of using the water to help me relax and to my delight, it was. I got changed and as elegantly as I could (not very!) climbed into the pool.

Wow, I couldn’t believe what a difference the water made! My body felt much more relaxed and I just felt more supported when trying various positions until I found one that felt right and it allowed me to ‘rotate to dilate’ with ease.

Once again, I found myself in my own ‘birthing bubble’ for what seemed like minutes but was a few hours.  During this time I listened to my favourite music, puffed on my gas and air, repeated positive affirmations over and over again and discovered that there was another use for a sieve other than just getting lumps out of flour.  It wasn’t long before I felt that uncontrollable urge to bear down. Similar to the birth of Luella, this again was the toughest part of my labour but having the support of the water this time meant that I could keep upright and work with gravity.  After a lot of encouragement from my other half, the midwives and using every ounce of energy I had left in me, oh, and a pair of shoulders getting stuck  (the drama queen) my gorgeous baby boy Levison Oakley was born.  8lb 10oz of pure loveliness born at 8.30am, exactly eighteen months to the day his older sister was born and just like that sweet old lady had said, he was just beautiful…

A desire to support other mums-to-be

I was completely in love and not just in love with another little human being but as cheesy as it sounds, completely in love with Daisy.  Yet again it had empowered me to achieve the birth I wanted.  I felt calm, relaxed and in control.  I had well and truly turned right at that crossroads in my life and was heading down that road at full speed to become a Daisy Birthing teacher and support other mums-to-be in the fantastic way that Charlotte had supported me in my birth journey…. 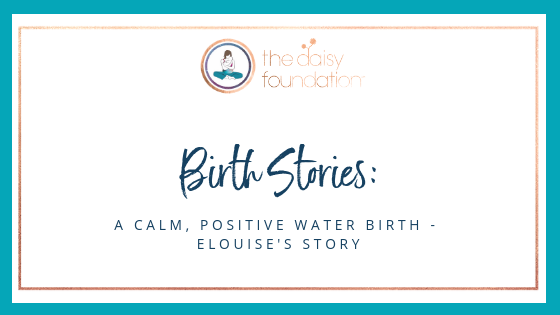