Finding out I was pregnant should have been a wonderful thing. Having a baby is exciting! A new chapter, a new beginning and the start of our family. To be honest, after the initial shock, it was. I was lucky with my first that I didn’t feel too sick. A bit nauseous, but it didn’t interfere with my life. I was just extremely tired. As I got towards six weeks pregnant, something didn’t feel right. I felt really low and I had no enjoyment in anything in my life. Even getting out of bed each morning was a struggle. Gradually, each day it started to feel like a big cloud was descending over me. I put it down to normal pregnancy hormones and carried on.

When I was seven weeks pregnant, my husband and I went away to Portugal where we told his mum we were expecting a baby in December. She was over the moon, but I felt nothing. No joy, no happiness. Just total and utter dread. What would my life be like with a baby? I saw parents with their children playing on the beach and felt sheer terror. I had an overwhelming feeling that I did not want my life to change. I did not want a baby, this baby. My husband, though sympathetic, could not really understand and kept saying I should be happy. It was actually during this holiday that he proposed to me. Of course, I said yes; but I was not happy, I had no rush of joy. I just felt numb.

These feelings continued for weeks but still, I put it down to hormones; to feeling sick, to feeling a bit scared at this new stage in my life. When I was fourteen weeks pregnant, I woke up one morning and remember my head felt clear, like a massive weight had been lifted off my shoulders. It felt absolutely incredible. I felt free. My life was good and my baby was healthy. The rush of joy and exhilaration finally came! It was then I realised that maybe I had been suffering from depression. It was not just the usual pregnancy blues. I found something I had written during the first trimester questioning the point of life. What was the point of doing anything if we just die in the end anyway? No one will remember you and you will not remember your life so what is the point? I don’t remember feeling suicidal and I really do not think I was. These feelings were a manifestation of my depression. It was frightening finding that though.

I found out I was pregnant for a second time, when my son was eighteen months old. A surprise, but a happy one. When I was 6 weeks pregnant, I got the same sinking feeling. I felt the cloud descend over me, taking me back to that dark abyss. I felt panic at how having a baby would affect my son who was still breastfeeding, and that he didn’t deserve to have his little world turned upside down. I felt numb, I felt no joy or happiness at all. I was much sicker this time and even considered terminating the pregnancy; something I would never do in my normal frame of mind. I spent my days lay on the sofa feeling sorry for myself. I was lucky to have a good support network to help look after my son, but I am saddened that I remember very little from that stage in his infanthood. I feel like I was missing for a chunk of his life. When I was sixteen weeks pregnant, I woke up one morning feeling light and free. The weight had gone and my head was clear. This time I told my midwife exactly what it was, although all she did was note that I was more likely to suffer postnatal depression; thankfully I didn’t either time.

The PANDAS foundation suggests that one in ten pregnant women will suffer from depression at some point during pregnancy, and around one in thirty will suffer both antenatal and postnatal depression. The triggers for antenatal depression can be physical, emotional or social. I think mine was caused by the hormonal changes or imbalances of the first trimester as it lifted when I was into the second. Antenatal depression is still not widely recognised, with most people putting it down to hormones, rather than real depression. This is not useful for those suffering from it as it can be completely debilitating. It may also be hard to admit how you feel; you have a new life growing inside you and you should feel ecstatic, right? If you think what you are feeling is more than ‘normal’ pregnancy blues, do seek support. Talk to your midwife, be honest with family and friends. It is absolutely nothing to be ashamed of and does not mean you will not love your baby. Antenatal Depression is most definitely real and it is a very scary place to be in.

(Blog contributed by one of our Daisy Teachers Chloe Sena) 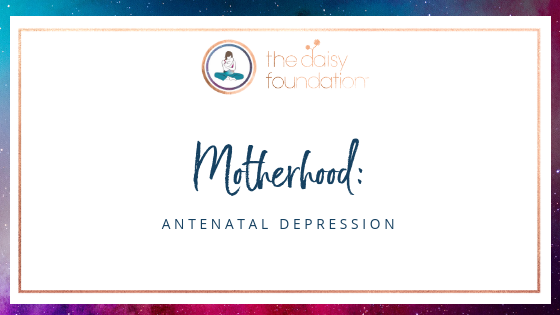