A positive birth story – one amazing daisy birthing mummy Fay and the birth of baby Nova – thank you for sharing it with us!

Nova’s due date was Sunday 12 Oct. Phil and I already have two children so we kinda know the drill about labour – twinges, false starts, backache, ‘period pain’.

It started when I woke up abruptly at 5am on Sunday with a steady trickle of amniotic fluid. We called triage at Jessops just to check about infection policy. They wanted us to come in, but we declined. I wasn’t in labour, just wet. I had a lovely hot shower and decided to look for the purple line (sure enough, it was there!) Things went pretty steady throughout the day with period pain like cramps and general soreness at the base of my back. We decided to go for celebratory sushi in town.

Things started kicking off properly at around 6pm (after a lovely long nap) so we decided to get the co-sleeper cot down from the loft and assemble it (yup, we’re that organised). Once done, we had some tea – all the while my contractions were gathering pace and intensity. We set up the lounge for Nova’s arrival – a squishy waterproof playmat (sorry kids!), my lucky birthing t-shirt and a heap of towels. By 8.30pm, we called triage at Jessops to request a midwife. All the time, Phil never left my side. He constantly told me he was there and that soon Nova would be here I began seriously relying my Daisy breathing techniques to blow the pain away – not once forgetting to breathe and relax as much as I could. By 9pm the midwife hadn’t arrived and the only pain relief I’d had was two paracetamol and lots of breathing. After another call to triage, they told us a midwife was on her way. At 10pm Angelina arrived and after a quick exam, told me I was 4cm and in active labour.

I remember growling a lot when I breathed out, feeling very primal on all fours, almost roaring. Phil never left me, not even to put the kettle on. I hung on to him as he held me – I’d never felt so close to anyone before.

By 10.30pm I requested the diamorphine. I felt shattered and achey (being on your hands and knees, no matter how squishy the playmat is, takes its toll). Unfortunately, as soon as Angelina gave me the injection, I felt Nova coming. After two pushes she was out! However, 10 mins later the diamorphine kicked in and I was struggling to get a grip on reality and keep my eyes open! Nova arrived on her due date at 10.40pm weighing 6lb 13oz and latched on to my breast immediately! “ 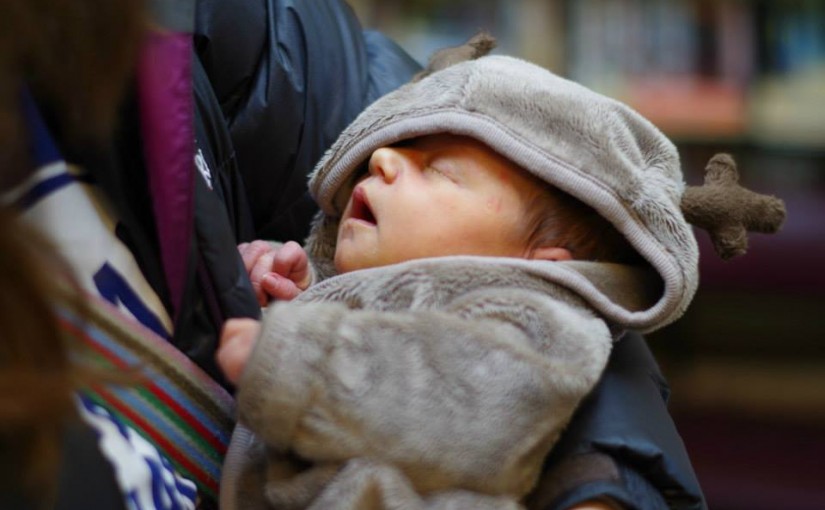